A few months ago, I wrote about the most bizarre and tragic family history story I've ever discovered in my family - the story of Bertha Beilstein. At the time, I went through newspapers on Ancestry. and Newspaper Archive, and various websites found through Google searches and pulled together over 70 different articles on the story. Somehow, in all that searching, I was not able to find a single obituary for her father, John Frederick Beilstein, whose death was the trigger (no pun intended) for the whole series of events. Then recently, I saw an ad for Newspapers.com, a site I haven't previously subscribed to, saying they were offering a discount price of $8 a month. I thought, I can spend 8 bucks to take a peek in a new database. So I did. 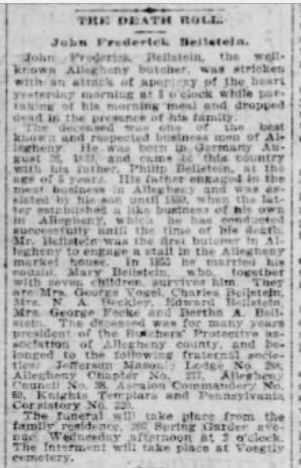 There was some new information in this that I haven't seen anywhere else. It says he came to the US at the age of 5 with his father Philip Beilstein (a name I haven't seen anywhere else yet) and that his wife Mary was in fact his cousin (something I've long suspected). It also says he learned the butchering trade from his father, which means that my ancestor Jacob Beilstein (John Frederick's brother-in-law and apprentice) owed his profession to Philip. Interesting side note - the obituary gives Nicholas Voegtly's last name as Beckley in the list of survivors, but spells it correctly when it gives the name of the cemetery where John Frederick was buried (Voegtly cemetery).

It just goes to show you, you really do need to fish in all ponds if you really want to find all the information you can about your ancestors. Ancestry, FamilySearch, Newspapers.com, and many other sites all exist separately for a reason - they may share some record sets, but they each have some unique records that no one else does, and you never know which pond may have that one document that you're looking for.
Posted by ironhide781 at 6:00 AM

You are amazing. I just hope that people will realize what you can do for them in the genealogy search department!!