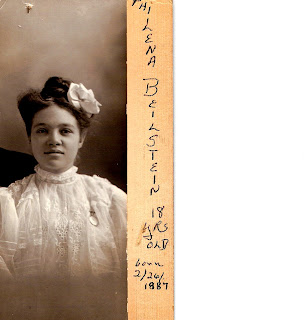 This is a photo of my 2nd-great-grandmother, Philena "Lena" Emily Beilstein. I really like this photo because the picture is so clear. This was taken around 1905. It looks like there was another person in the picture but he (I'm guessing it's a he, because the shoulder is taller than Lena, and looks to be a dark-colored suit) was cut out. Lena got married in 1903 to David Briscoe, and in 1907 to Clarence Johnson, so it could possibly have been either of them. Either way, it's a great shot of Lena when she was young, before all the trials and hardships she would later endure.