Genes Day Friday - Wait, I have WHAT in my DNA?

After reading a post on Roberta Estes' DNA-Explain blog about using trying to learn more about the tiny chunks of minority DNA in your test results, I thought I'd give it a shot. After 23andMe revamped their admixture calculator (now called Ancestry Composition) my maternal grandmother's DNA test surprised me by showing her as having 0.1% African DNA on chromosome 3.

If my math is correct, that means she would have one 8th-great-grandparent with 100% African DNA (which we all know is impossible, since everyone in the world is a mixture of several groups). Roberta suggested going to Gedmatch.com and using the admixture tools they've incorporated on their site, to see what else you can discover around those tiny minority segments. Since I uploaded grandma's test to Gedmatch right after I first got her results, I was able to dive right in. While I still have a lot to learn about how to make full use of these tools, I was able to at least figure out how to go in and look for confirmation of the African segment. What I found was both enlightening and confusing.

First, let's look at the MDLP World-22 admixture tool. According to their admixture breakdown, grandma has 0.8% Pygmy DNA on chromosome 3. This is confirmed by the graphic representation of chromosome 3, with the bright red segment (circled for your convenience) shows the segment in question. 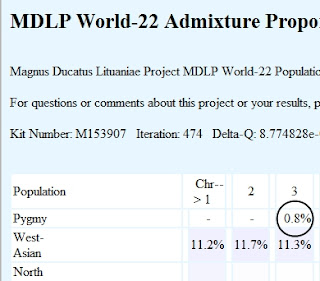 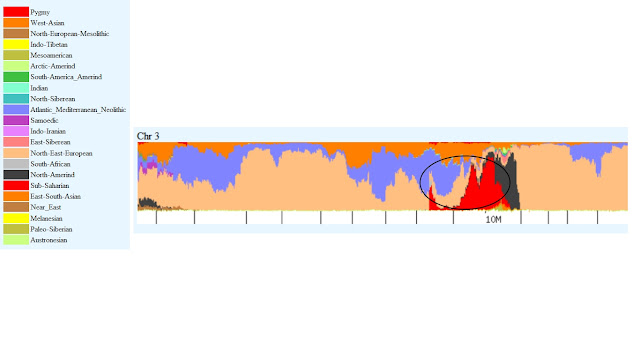 So their calculations match up with 23andMe in terms of percentage and location of African DNA. So far, so good.

Next up, let's look at Dodecad. The graphic view of chromosome 3 shows Neo-African, West African, East African, and Paleo-African DNA, all lumped together in the same spot where MDLP showed Pygmy DNA. 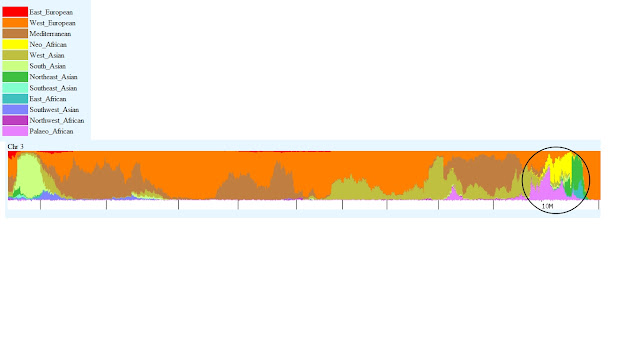 But when I go to the admixture calculations, all the African values read zero.
﻿ 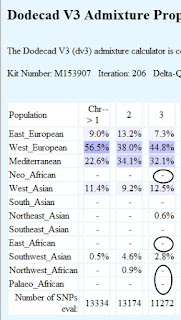 Why would the graph show African, and the numbers not? I don't know.

Now we'll look at Eurogenes K9 model (and no, it has nothing to do with dogs). Here, the graph shows West African DNA, in the same spot on chromosome 3 as the others.

﻿
Again, I'm at a complete loss as to why the graph would show West African DNA, but the admixture breakdown does not.

Finally, the last of the Gedmatch admixture tools, HarappaWorld. Their graph shows Pygmy, West African, and a smidge of East African DNA, again in the same spot on chromosome 3 as the others.

And what does their admixture calculator show? Nothing, as far as African DNA is concerned.

I'm sure there's a good explanation for this, and I'll be asking around on the DNA mailing lists I'm on to figure out what's going on. But it kind of makes me wonder what other numbers are wrong. Going through all 23 chromosomes, on four different admixture tools will take some time. But as far as I'm concerned, the African DNA seems to be there - all five graphs found it, in the same spot on the same chromosome, and two sets of admixture﻿ calculations did too. In my mind, that's evidence enough.
For me, the next step will be finding DNA matches who also share this African segment on their DNA, to see if I can't trace where in grandma's family lines this little nugget came from. Of all the minorities in the world, I never expected to find DNA from Africa in my family tree, so I'm excited to see what I can learn about it.
Posted by ironhide781 at 5:11 PM

This makes my brain hurt!

isn't there other pygmy people other wise then afraican

Not as far as I know, at least according to my understanding of the base populations these projects are using.