Back again to Africa

In this third and final post in the series of my African DNA segments (click here to see parts one and two), I'm going to be looking at my paternal grandmother's DNA results. According to 23andMe, grandma has a little segment of African DNA on her 9th chromosome, comprising about 3.9% of the chromosome. This one is different from the segments found in my paternal grandfather and maternal grandmother's tests, however, in that the DNA is identified as North African, while the other two were both Sub-Saharan African. 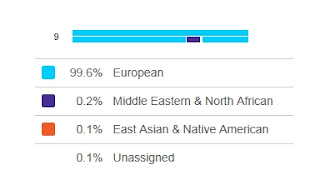 ﻿
Let's start the comparison by looking at the Dodecad admixture tool, which has four African populations. According to their chromosome painting tool, grandma shows positive for Palaeo-African, and possibly Northwest African a little to the right of the Palaeo-African. 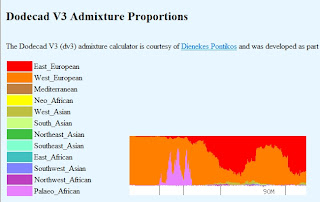 When I pull up the numbers for Dodecad, both Palaeo-African and Northwest African are zeroes, but East African shows 2.2%.
﻿ 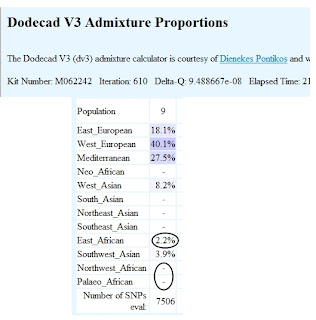 This is much less than the 3.8% predicted by 23andMe. Not a very good match-up, but at least this tool's breakdown and the graph both showed African DNA.

On to Eurogenes' admixture tool. It only has one African population, West African, which shows up quite clearly on chromosome 9. 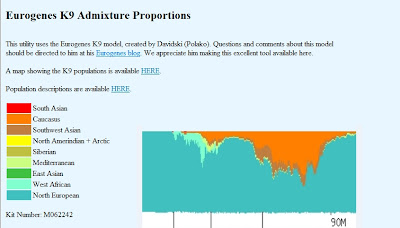 When we look at the percentage breakdown, however, West African comes up empty. 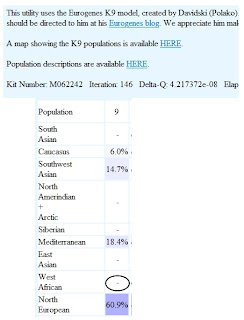 Given the size of the other populations assigned to chromosome 9, the African segment may have just been too small for the calculator to detect. Or it may have just been absorbed into the ethnicities surrounding it. Whatever the reason, the numbers and the graph don't agree for this section of this chromosome.

Now for the HarappaWorld admixture tool. This one has four African populations, and I can pick out three of them in the graph - San, Pygmy, and West African. I'm not sure if Pygmy is the largest of the three, or just stretched out by the graph tool. 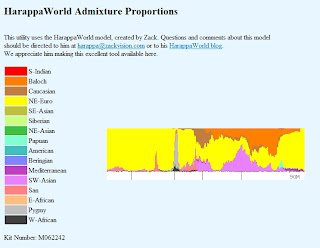 The numbers show hits in two populations, Pygmy and San, but no West African. Pygmy is quite a bit smaller than San. The total percentage of African DNA that HarappaWorld sees on chromosome 9 is 0.5%. This is drastically smaller than either 23andMe or Dodecad, 3.3% and 1.7% smaller respectively. I wonder why they see the same stretches of DNA so differently.

And finally, the MDLP tool. This tool has three African populations, but grandma only showed positive for Pygmy DNA. 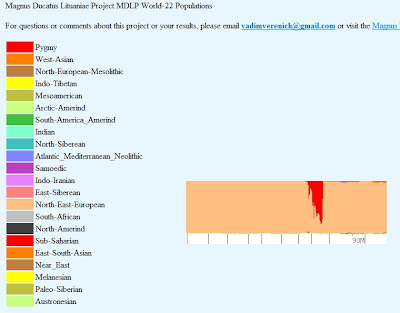 And what do the numbers show? No African DNA at all. 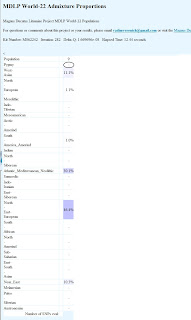 That's the second tool that has shown grandma having African DNA in the graph, but not in the percentage breakdown. With no breakdown, I don't have any numbers to compare to the other two that did give me percentages for the African DNA. But the graph agrees that there is African DNA there.

What have I learned from going through all of this? Several things:

1. Admixture analysis is far from being an exact science. The chromosome painting offered by one tool can, and often does, disagree with the percentage breakdown of the same tool. Clearly there's some fine tuning still to come in this.

2. Even when multiple tools do agree on the general ethnicity of a segment, they disagree (sometimes wildly) on the segment's size. I think this is part of #1, but it was interesting to see (especially in my paternal grandmother's DNA) the varying sizes of the African DNA segments. I wonder if this is due to the ongoing work to determine the origin of the various AIMs or SNPs used in these calculators, or just the way the computer tallies the info.

3. Although the numbers disagreed with the populations shown in the graphs, every graph on every tool showed African DNA in the same place of the same segment of the same chromosome. This was the most interesting part. All the projects (I'm assuming) are based on different base populations, from different regions and using varying numbers of people. But they all showed African DNA just where 23andMe originally did. I don't know how conclusive that is overall, but until someone comes up with a pretty reason to reject this hypothesis, I'm going to believe that all three of my grandparents analyzed have these little chunks of African DNA.

4. If my hypothesis is correct, and this really is African DNA that's showing up my grandparents' DNA tests, that means I have three African ancestors somewhere back in my ancestry, one in each of my grandparents' family trees. Given the size of the segments, that ancestor is probably too far back to trace to by paper genealogy, unless I hit a HUGE stroke of luck one day. But it's fascinating to see something in my genealogy that I probably would never have seen any other way.

5. My mom's DNA test showed her as having the same African segment as my maternal grandmother, but no other. She only has half of my maternal grandfather's DNA, so I'd have to test my aunt and uncle to see if his side had any African. I'd like to do that someday, time and finances willing.
Posted by ironhide781 at 11:20 PM

Yikes - all those numbers hurt my brain. This is a surprise - does this mean I can claim minority status now???? haha

Lol hey if the politicians can do it, why not?