Cain history page 10 - The descendants of Dennis and Catherine

We come now to the final page of the Cain history. This is the shortest page of the whole thing, but it does have some really good information on it. 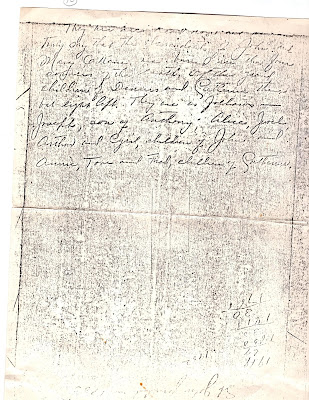 Anthony Cain had 5 children that I know of, Joseph, Isabel, Clara, Alexander, and Catherine. Joseph was the oldest, born in 1873, and died in Tacoma, Washington (not far from me!) in 1967.  I don't have death dates for any of his other children, but apparently the author knew or believed they'd all died before then. It's definitely possible since they were born in the 1870s-1880s.

John Cain had 9 children - Alice, Catherine Irene, Julia/Jewel, Arthur, Francis Joseph, John Francis, John Elliott, Anthony, and Cyril. Alice died in 1953, Francis and John Francis died in 1888 and 1889 respectively as infants. John Elliott died sometime before 1940, and Anthony died in 1942. I don't have death dates yet for Catherine Irene, Julia, Arthur, or Cyril, but apparently Catherine had passed away before the history was written, so presumably sometime before 1953.

Catherine had 5 children - Annie Condon, John Henry, Thomas, John Frederick, and David. John Henry died as a baby or young child sometime before 1900. Thomas died in 1954. David passed away in 1960, Fred in 1967, and Annie last in 1971. If the history was written before Alice died in 1953, then David should have been listed as a living grandchild as well as Tom, Annie, and Fred. My guess is she either didn't know he was still alive or forgot to include him. Sorry, Dave.

All in all this has been a very interesting history of my Cain family. I have some really interesting leads to follow up on, especially in New Brunswick. I need to go back through these posts and compile a list of them for easy reference, and just start checking them off, one by one. Then it's on to the next project or lead. I love this stuff!
Posted by ironhide781 at 12:56 AM