Today's post goes over the penultimate page of the Cain family history, which discusses the last few years of Dennis's life. 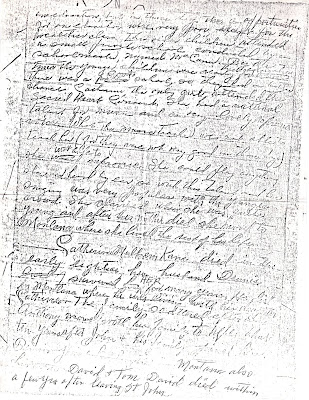 The author starts off by discussing how opportunities for education difficult for the non-wealthy to obtain. Some of Dennis and Catherine's children apparently went to a public school taught by a schoolmaster named McCann (except for Catherine, who attended the Sacred Heart convent). The younger children, she says, had a better chance to go to school. There only four boys that I know of that could have gone to school, and the author doesn't say which were taught by McCann and which had the "better chance" (whatever that meant).

Catherine is said to have had a "very lovely soprano voice," and a natural talent for music, being able to play anything she heard. My cousin Tyeler has a natural talent for music, being able to both play and sing really well. It would be pretty cool if that was a talent he inherited from Catherine. What I don't understand is the part where it says music teachers weren't very good in those days. I find it hard to believe that good music teachers are a recent development, given the quality of music that has existed for at least the last several hundred years.

The author says Dennis's wife Catherine died in the early 1880s, and that is accurate - she died in 1881, not long after the census was taken that year. She mentions how the family scattered after her death, with sons Anthony and John going to Minneapolis, Catherine and Dennis going to Montana, and sons David and Thomas following Catherine. She says David died just a few years after leaving Saint John. It looks like I had a record of David Cain's death in Montana in 1889, but I can't find it now. I'll have to get that back. I learned a while ago that Thomas died apparently unmarried in Seattle in 1935, though the informant was apparently a relative named J.P. Kane from Tacoma.

The family did scatter like the author says. I have made contact with a descendant of John Cain, that's who sent me this history. I've traced some of Anthony's descendants down to the 1920s, so that line was still around back then. I think Anthony, John, and Catherine were the only children of Dennis and Catherine to have children of their own. I wonder how many of us there are in total. I think I'll do a descendant count, and see how large a posterity Dennis and Catherine have, at least that I've found so far.