Genealogy Blog Party - April 2016: The Doctor and I

Elizabeth O'Neal recently suggested we have a genealogy blog party, and I thought it was a great idea! The theme of the part is this: after saving the universe with The Doctor (from Doctor Who), he offers to take me back to meet an ancestor of mine. Where do I go? Who do I visit? Do I disrupt the space-time continuum? The possibilities are pretty close to endless, but here's what and who I chose: 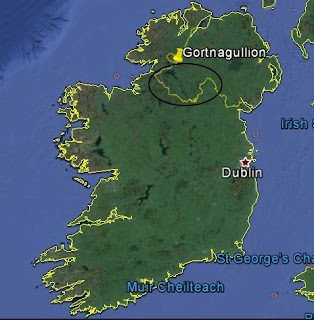 I would head to Gortnagullion, County Fermanagh, Ireland in 1844, where my 3rd-great-grandfather Henry Gibson and his wife Ann were living. I want to see what conditions were like for them in Ireland, and whether they chose to leave for more opportunity or just to survive. I would of course ask him who his ancestors were as far back as he knows, for himself and his wife, and whether he knows if his family originally came from Scotland or England. But I would also want to know more about him personally - what his goals were, what he wanted out of life for himself and his family, and what he felt about Ireland as a country. Was he proud to be Irish even though he ended up leaving? Would he want his descendants to remember where in Ireland they came from, or would that even matter to him?

I would probably want to tell him who I am, that I am his descendant from 170 years in the future, but after seeing the Back to the Future movies, I would probably restrain myself for fear of creating a paradox and destroying the universe. I would like to tell him in general terms that his family survives and thrives in the new world, serving in the military, becoming doctors and nurses and many other honorable occupations. And maybe, just maybe, try to convince him to do a DNA test for me.
Posted by ironhide781 at 1:00 PM

I love your Back to the Future reference! Then I laughed out loud with the DNA sample issue. I hadn't thought about that. Maybe I should find a way to snack a lock of hair from my ancestor. It would be something.

Wow, that's a great idea doing the DNA test. I hadn't thought about that.

I also love the idea about having him do a DNA test. If only we could!

Your post is similar to mine in the sense that both of us are primarily interested in seeing how our ancestors lived. I also chose not to reveal my identity to my two grandmothers, mostly because I wanted the focus of the visit to be on them and their lives. Good luck with your research! The DNA test--very clever!

Oh, that would be fun to have an ancestor do a DNA test. That, combined with whatever knowledge they have about their ancestors (names, dates, locations, etc.) would certainly help in one's family history research. I like that you would ask him about his goals in life. It's hard for me to imagine people having goals beyond feeding, clothing, and sheltering their family when (if) being able to provide those things was barely manageable. (Not saying that's so for your ancestor, though I think it was for some of mine.)