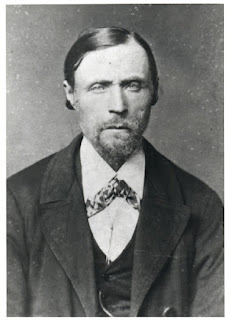 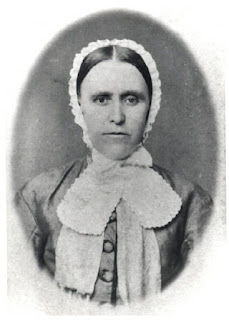 These pictures are of my 3rd-great-grandparents, Ludwig Joseph and Justine (Witt) Joseph. They were born in Poland - Ludwig in Kepa Kikolska and Justine in Rajszew, married and moved to what is now Ukraine, and eventually immigrated to Canada, where they both died. They raised seven children - Gottlieb, Samuel, Justine, Wilhelmine, Ludwig, Heinrich, and Michael, though Michael died at age 21.

Photos of Ludwig and Justine are courtesy of my cousin Jim Joseph of Mississauga, Ontario.
Posted by ironhide781 at 6:00 AM

Nice photos. Do you know when they were taken?

No, but my guess is around 1860-1870. The big photo at the top of my blog has Ludwig in the middle (the one with the beard) and he was about 80 then. I don't have any other pictures of Justine to compare hers to, sadly. I'm almost positive (at this point at least) that these photos were taken in the old country.

I checked on the back of my photocopy of the picture of Ludwig and Justine.
A message tells me who has the original pictures is in Barrie Ontario Canada.
I will check and post in a few days with an update of the time period of the pictures.

Regards To All,
Jim Joseph