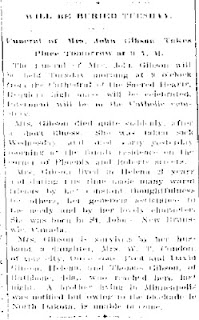 This is one of the obituaries I found a couple of weeks ago, as I talked about here. It's for my great-great-grandmother, Catherine (Cain) Gibson. She was born on 4 February 1854, in New Brunswick, Canada. She married my great-great-grandfather John Gibson in 1879 (and she had to get a dispensation from the Catholic church she attended to do it, as John was a member of the Church of England). They had 1 girl and 4 boys, the last of which was born in Montana, where they moved around 1884. She died of pneumonia in 1907. Her obituary was pretty hard to read, but here's what I could read of it.

The funeral of Mrs. John Gibson will be held Tuesday morning at 9 o’clock…Cathedral of the Sacred Heart…will be celebrated. Interment will be in the Catholic cemetery.

Mrs. Gibson died quite suddenly, after a short illness. She was taken sick Wednesday and died only yesterday morning at the family residence on the corner of __ and __ streets.

Mrs. Gibson lived in Helena 21 years…made many warm friends by her constant thoughtfulness…others, her generous…and by her lovely character. She was born in St. John, New Brunswick, Canada.

Mrs. Gibson is survived by her husband, a daughter, Mrs. W. T. Condon of this city…Fred and David Gibson, Helena, and Thomas Gibson, of …Ida., who reached here last night. A brother living in Minneapolis was notified but owing to the…North Dakota is unable to come.