I'm back to working on my old project (that I was doing before the beige photo album project) of going through my files and documents and verifying that everything is entered into my database. While taking a few minutes last night to enter a couple census records on my Craddock ancestors 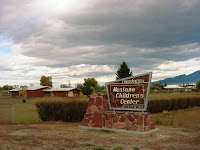 (my great-grandma was Edna Craddock, one of two great-grandparents I actually got to meet, and the only one I actually really knew), I stopped at the 1930 census record of my g-grandma Edna's sisters Grace and Elsie. There were little girls at the time, living in the Montana State Orphan's Home (later called the Montana Children's Center). They weren't orphans really, as both parents were still alive and would be for years to come, but they couldn't afford to take care of the girls (there were four altogether) so they put them in the Orphan's Home for a while. It never really hit me until last night that this was how my great-grandma lived through the Great Depression - basically like an orphan.
Anyways, I decided to see if there wasn't any info on the Internet about the Orphan's Ho 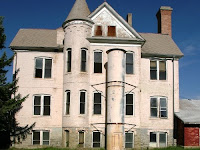 me, so I headed to Google searched for Twin Bridges Montana Orphan's Home. What I found was a website for the property owner of the now abandoned Children's Center. The main page had a bunch of pictures that cycled through like a slide show, so I saved a bunch of them to my hard drive (it w 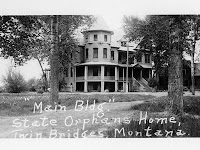 as really helpful that they were labeled, so I knew a little bit of what I was seeing). Then I noticed that they had a history tab at the top, so I clicked on it. There I found a bunch of old photos from the 1930s and forward - staff photos it seemed mostly, and of the grounds from different points and at different times of the year. This was really interesting, to see the house as it would have looked to my great-grandma while she was there, and maybe some of the workers she knew.
But wait - there's more! They also had a group of buttons on this page, with a label that said "select era to see mor

ind one or two of my great-grandma and/or her sisters. Sadly, there weren't any pictures of my family up there, but I did find one very interesting picture. They had a photo of Ruth Morris and Madeline Sabo, taken about 1935. Those names sounded familiar for some reason, so I went back to the census record for Grace and Elsie. Sure enough, they were on the same census page! Madeline is listed the next line down from

Elsie, and Ruth is just a couple lines up from Grace. It kind of took me back for a minute, looking at these two young girls, who in all likelihood knew my great-grandma and her sisters. Were they friends? Did they fight? I don't know, but it's fun to think about. It also brought home that this was an orphanage, and (from what I read on the orphanage's website) some kids never got to leave, even died there. I'm glad that fate didn't befall my ancestors, but sad that it happened to people in other family trees.
So the wisdom I gained about my great-grandma's life - a view of the orphanage she lived in, more info about conditions and life there, and even a picture of some of her fellow 'inmates' (as the census refers to them) - was a lot more than I bargained for from what was meant to be a quick internet search. But that's what I love about genealogy - it's hard to find what you're looking for, but sometimes, you hit the jackpot.
Posted by ironhide781 at 9:24 AM

I drove the Buck and Ben team when I was in Home. I kept a 5 year diary during my last 5 years in the Home. I will Send the material to anyone who has an interest. No charge.

Interesting story and a great find. I am also researching my family tree, Gibson is my maiden name. Where can I view your Gibson side to see if we connect?

I ran across your blog by accident and I am fascinated with your ancestry search. I too am doing an ancestry search but what I wanted to share was that I have been to The Montana Children's home. We passed by it on our way to see Bannack St. Park, another abandoned town in Montana and also fascinating.

On the way back to our rental cabin in Ennis, I had my husband stop at the front entrance of the Montana Children's Home. I was so fascinated. I began snapping pictures left and right when the property manager came to the gate in her car. She told me it was for sale and that there was a website. As soon as I got home I went to the same website that you are talking about in this blog. The most amazing thing I want to share with you, if you have never been there is this...it is out in the middle of nowhere with some of the most breath taking scenery I have ever seen. I got to wondering how did all these children end up here, out in the middle of nowhere.

My father Robert Leo Essex was in the Montana State Orphan Home in Twin Bridges from 1036 - 1941. We are looking into websites for information on the facility. He would like to hear from anyone who lived there or had relatives that were there during those years.
Robert Essex
ed.sharonperez@gmail.com

I too am doing family research. My father and his two brothers lived at the Twin Bridges home for orphans in the early part of the 21st century. Wanting to know what their childhood was like,I have been looking everywhere. Thanks Noel Freedman for sharing your life and helping the decendants understand more about their parents and grandparents. I too am an orpan. It helps understand my parents murder/suicide by knowing the pain of their existence. The Home is in a beautiful site which I have visited twice. I hope people will keep it going for some positive function. It is too great to let fall into ruins. Donna in North Carolina

I have found through further research that possibly my father's aunt and uncles were in the orphanage in the early 1930's, before my father Robert Essex was there. I'm looking for realatives of Jessie, Truman and Robert whom my father possibly was named after. Their father's name was Theodore Essex, from Tennessee. My father's mother's name was Lucille May. Does anyone have info on these people? ed.sharoperez@gmail.com. April 3. 2014

I am fascinated by the comments on the Children's Center. My three siblings and I were there from 1969-1975, when it was closed. They say it has opportunities to visit the center in May. I would love to revisit the Children's Center. I was in in the LG, and Meadowlark cottages. I have a picture with me in front of my locker, and another on the steps of LG. You can contact me falcon7013@yahoo.com

Ran across your blog while doing research for my sister in law. Her father was adopted from there in about 1920. His name was James Daniel"Bud" Cooper as far as we know. He was adopted by Jim & Edna Swindle. They lived near Culberson, Mt. He died in a plane crash near Culbertson in 1948. Would love to hear from anyone who may have known him. You can contact me at stancj2a@aol.com

For all the people looking for more info about their ancestors and the Twin Bridges orphanage: I spent time in this town (super small town than) in 1998/1999 - at that time an old guy was running a museum in Twin bridges. Pending something catastrophic, MASS amounts of information was there about the orphanage and its residents - -- Not to mention the old man who was running the place at the time could tell you anything about the building, history/stories, I suspect he may have been a resident or had one that very close to him.

Twin Bridges Historic society. Frankly I'm surprised no locals have mentioned it, if your serious take a trip there it will be unforgettable.

In response to Ames "I got to wondering how did all these children end up here, out in the middle of nowhere."

This orphanage was the designated state location. Prior to 1875 when Helena was est as the capitol city, another city Bannock relatively close to Twin Bridges was the temporally the capitol of Montana, (Also Virginia City). In 1894 it was opened, I would suspect the location designation, and construction/time given the above details account for what may now seem an odd location.

Now the very sad part is why so many children? Mining accidents account for the majority, illness was perhaps second leading cause...Thought's of the mother may arise - but in ye old west esp a state where Mining and ranching were the mainstays, Widowed mothers could not easily find work to support their children, and unlike the movies men at that time were not often interested in taking the responsibility of children that were not their own. A majority of Widows with children had only two options, watch their children starve to death or send them to the orphanage. It was time based on logical options/self preservation, not so much feelings. I however do not doubt that the majority of widows hearts were broken by the prospect.