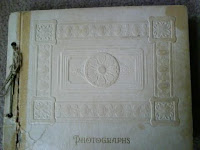 I know I haven't been posting much on here the last several days, but I have a really good excuse! My grandma's third photo album, the one with the most pictures of all three, is finally scanned, identified, and every single individual picture separated (digitally) and labeled. In total, there were 838 pictures!!! As my wife will tell you, I haven't been much use around the house the last week as I've been pushing (slowly but steadily) to get this monumental project done (well, monumental in my mind at least). It's been fascinating to see the places my great-grandparents went, the people they were friends with, and some of the things they did. In a future post, I'll talk about some of the things I learned about my great-grandmother by doing this project (it was a lot!) and throw some of the pictures on here so you can see what I've been up to. But first, let me breathe one big sigh of relief that a major project is finally done!
*SIGH*
Ok. On to the next project!!
Posted by ironhide781 at 8:45 AM

Congratulations!! Not only is is done, but what a treasure for future generations to be able to have essentially multiple copies of a one of a kind item - it's great to be able to share treasures like this will multiple family members while the original never has to leave home.

Can't wait to read more about what you learned about your great-grandparents.

Great job! IT is a lot of work, but it's well worth it.
Generations of your family will thank you.