I got a call last night from my mom about 8:30. She had some questions about my great-grandma Rosie's second husband, Clarence Morris (whom we all called Unc). I had a little info on him entered in my database, but not a lot. I took a look in the files I'd saved on the Wagner family (the family Unc married into) and compared them to my database. I saw that I hadn't even entered in the censuses I'd looked up on him and his family, including his first wife Blanche (which is one reason I'd taken on the project of going through my files and making sure they were all entered in my database - I knew I'd missed stuff like that). So I took a minute to plug in Blanche's name and a little about her from the census, and added Unc's birthplace while I was talking to my mom about them, and I asked when Blanche died. Mom said she died sometime in the early 70s as Unc had married Rosie in 1976, and that she and Unc had stayed married until Blanche died. I went on to Ancestry.com and saw that she didn't have a record in the SSDI (Social Security Death Index). Fortunately, Ancestry also has a really good death index for Montana, going from 1860 up through 2007. I found Blanche in the index, which gave her death date as 3 July 1971, which fit what my mom had said. 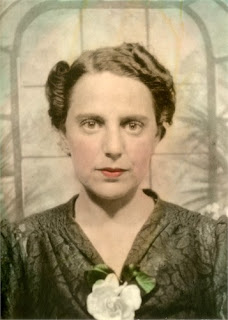 Being the curious little rabbit that I am, I decided to search all of Ancestry (now that I had an approximate date for her birth and exact date of death) and see what I could see. A few entries down the list of hits, I saw a listing for a Blanche Gasser, born in 1906 and died in 1971, and a picture included (the one you see at right). I'd never seen a picture of her before, and didn't know whether this was the right person, so I kept going down the list. 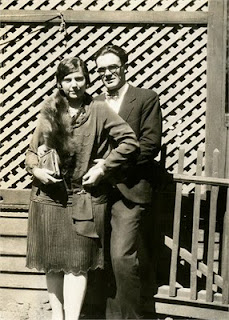 A few lines down, I saw an entry for a Blanche Morris, married to Clarence Rosco Morris, with a death date that exactly matched the Blanche I'd just looked up! Better yet, it had a picture attached to this one as well. I pulled it up, and it looked just like Grandpa Unc (as I'd grown up calling him), only a lot younger and with more hair than I'd ever seen him with. :) I was still on the phone while seeing this, so I told mom what I'd found and quickly emailed her the pictures. She agreed the picture of the couple was indeed Unc. I was pretty excited to have a picture of Unc that was so much earlier than anything I'd seen of him before.
I looked at the family tree of Blache (they didn't have much on Unc, just his mom), and it seems the owner of the tree tied into Blanche's mom's side, as they had several pictures on that side of the family. I emailed the owner of the tree, and look forward to (hopefully) swapping information on our common relatives. I also have some good leads on Blanche now, and can't wait to start digging up info on her. All of this, just in time for Treasure Chest Thursday. :)
Posted by ironhide781 at 9:42 AM