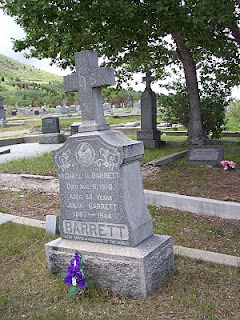 Today for Tombstone Tuesday, I'm going to spotlight a slightly more distant relative - my great-grandmother's brother's father-in-law, Michael H. Barrett. I don't know a whole lot about his life, sadly, as I haven't really researched him as thoroughly as I have my more direct ancestors and family. I do know that he and his wife Julia O'Connors were from Ireland, and Michael was born about 1860. He and Julia had at least three children, Thomas, born in 1892 in Minnesota, Julia, born 21 January 1895 also in Minnesota, and Mary Margaret, born about 1907 in Montana. They were Catholic, which I thought was interesting, as I have two direct-line Irish families, one of which was Cathlolic, while the other was Anglican. Makes me wonder how much of the Irish population of western Montana was Catholic. Anyways, Michael died on 9 August 1916 in Anaconda, Montana at age 56. He's buried in Mt. Carmel cemetery in Anaconda, with his wife Julia, daughter Julia, son-in-law Elmer Joseph, and grandaughter Marie Joseph. 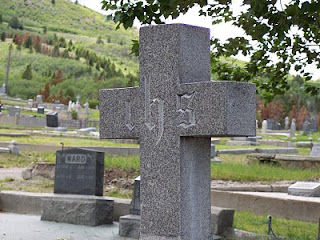 What really interests me about this headstone is the imagery used on it. I'm not too familiar with symbols and iconagraphy used by Catholics (I myself am a Latter-day Saint aka Mormon), so when I saw some unfamiliar symbols and phrases on Michael's tombstone, I hit the internet to see what I could learn. For example, on top of Michael's headstone is a cross with the letters 'ihs' inscribed. A quick Google search led me to a page that told me that those letters stand for Ihsus, or the name of Jesus in Greek, and that letters and phrases like this (or in Latin) were most often used by Catholics in the 20th century. This fits this family - a Catholic family from the early 20th century - perfectly. 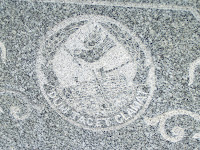 Another symbol on Michael's tombstone I found intriguing was the one pictured at left - a dove flying over a log and some woodworking tools, and the Latin words "dum tacet clamat". I'd never seen this before, so I did another Google search, which told me this symbol often appears on tombstones of men who were members of a lodge/insurance company called Woodmen of the World. The words mean "though silent, he speaks." I'm not sure what the significance of the phrase is, but I did see that at the bottom of the headstone (you can see it if you click on the first picture) the words "HERE RESTS A WOODMAN OF THE WORLD" are engraved. From what I've read of this group, they offered insurance and help to members, and even paid for their burial and headstones. So Michael was apparently a member of this lodge, and reaped at least one benefit - a nice headstone for himself and his wife.
The last thing I wanted to note about Michael was something that I saw in the plot a little behind and to the side of the main headstone: 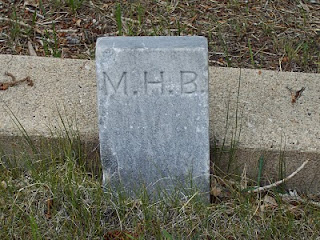 It looks like a little mini headstone, with Michael's initials on it. I'm not sure what it was doing there, maybe it was a placemarker until the big headstone arrived? If you know what this could have been for, please post a comment here. I'd love to find out!
So that's Tombstone Tuesday - a little information about Michael H. Barrett, and his interesting headstone.
Posted by ironhide781 at 8:59 AM

The "mini headstone" is a footstone. In this case it's used to mark the location of Michael in the family plot since there's a large double stone. They are often moved by mowing crews to a more convenient location in the plot. :(