There was another amazing find in my family history this week, but I didn't make it. My grandpa Fred called me on Sunday, saying he had a letter written in German that belonged to my 2nd-great-grandma, Mary Hoffman. I had no idea the letter even existed! He then asked if I'd like to have it. Um, YES!! He then offered to mail it to me the next day, I thanked him several times, and then had to wait three days for the letter to arrive. 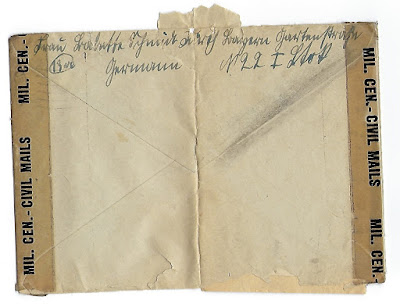 During those three days, I tried to imagine what it could be - a letter from her relatives in Bohemia? Perhaps even information on the identity of my great-grandmother's father??? I tried not to let my imagination run wild, but it was exciting to guess what could be in the letter.

When the letter finally came, several things struck me about the envelope - its age was readily apparent. It was brown and worn, almost soft to the touch. The sides were marked with tape letting the recipient know that the letter was opened by the military as part of censorship practices. That got me wondering when the letter was written - sometime during World War II maybe? There were postmarks on the front, but nothing that had a date. The back had the sender's name and address, but I couldn't read it - I could tell it was German, but the script was unfamiliar. The sender's given name looked like Babetta, maybe a form of Barbara? 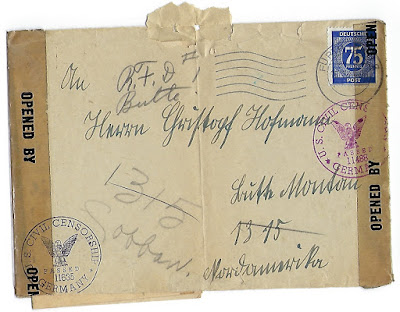 As I studied the front of the envelope, I noted the name of the addressee - Christopf Hofmann, which was my ancestor Mary Hoffman's husband (though he was always called Christ Hoffman by my family), and stepdad to my great-grandma Rosie and her sister Mary. I immediately realized this likely wasn't addressed to my ancestor, and probably had nothing to do with her family at all. But honestly, I didn't care - this was something OLD, from the Old World, in German and related to someone connected to my family. Something that had been held on to for decades and decades. With all the ancestors I have from foreign countries, nothing has been passed down in my family in a foreign language. I've got photocopies and scans of some documents in Norwegian (thanks to my cousin Delores Olson) and I've since found records in other languages on various websites. But I haven't held in my hands something from the Old Country in the original language of my ancestors - until this week. What a rush!!

I took it inside, gently opened it and extracted the letter. It was two pages, written in clear German script, but again in a variation of it that I found difficult to make out. 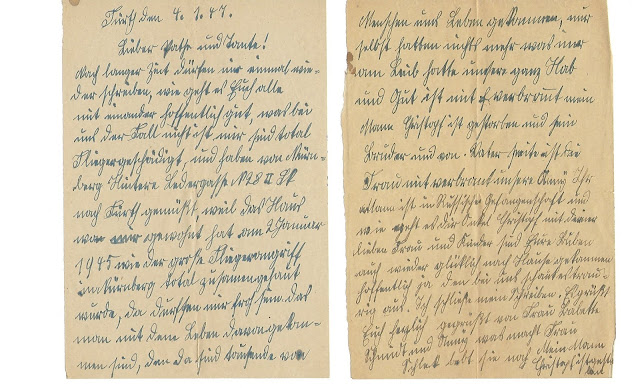 The date on the top looked like January 4, 1947 (or was it April 1? I don't know when Europe started using DDMMYY for their dates). I looked through it and saw 1945, and the name Babette again, but that's was about all I could make of it. I really wanted to know what it said, so I posted copies of the letter and the back of the envelope on the Genealogy Translations Facebook group I'm in, and asked for a translation. It only took a few hours before one of the volunteers kindly responded with a complete translation!

The return address on the back said "Frau Babette Schmidt, Furth, Bayern, Gartenstrasse N 22." So Babette was the sender, and perhaps a relative of Christ Hoffman. The text of the letter turned out to be extremely tragic. Here's the translation in full:

"Dear Godfather and Aunt,
After a long time we are finally allowed to write to you again. How are all of you? I hope you are well. I can't say the same about us. We were totally destroyed by an air raid and had to leave Nurnberg, Hintere Ledergasse No 28 second floor and had to go to Furth, because the house where we lived was totally destroyed on the 2nd of January 1945 during the great air raid on Nurnberg, and we were thankful to be alive. Thousands of people lost their lives. We only had the clothes we wore, all our possessions burned.
My husband Christopf has died and his brother. From fathers side, the wife burned to death. Our Anny's husband is a prisoner of war in Russia. And how are you uncle Christopf and your dear wife and children. Did your loved ones get home safe again? I hope so, here it looks very sad.
I will close this letter, sending you loving greetings
Frau Babette Schmidt and Anny.
How is Mrs. Schlek, is she still alive. My husband Christopf has died"

After reading the translation, my heart just broke for Babette. So much loss! Her husband, her home, all her belongings, her son-in-law's captivity, living in a strange new place. I know we did what we had to in order to win the war against Hitler and his Nazi regime, but this letter really puts a human face on the ordinary German people who suffered during the war and afterwards. It's a stark reminder that in war, there really are no victors in some ways - war results in loss for everyone involved.

What made this letter even more tragic was the fact that Christ Hoffman had actually passed away on 24 June 1942, almost five years before this letter was even written. Due to the war (and apparently its aftermath), Babette had been out of contact with Christ Hoffman for so long, she didn't know he had died years before. I hope Christ's widow Mary wrote back to Babette and let her know.

Two other things really stood out about this letter. First, the U.S. military was still screening and censoring letters almost two years after World War II had ended. Did they do that for all incoming mail from overseas? Just for Germany? I would have thought such practices would have ended with the war, but apparently not.

The other thing that stood out was the name of Babette's late husband - Christopf Schmidt. When my great-grandma Rosie and her sister Mary applied for Social Security Numbers in 1943 (on the same day, it turns out) they both put Chris Schmidt as their father. It may be a coincidence, as Schmidt is a very common German surname, and Chris is a popular first name. I also know now that Rosie and Mary had different fathers, so even if one of them had a father named Chris Schmidt, both didn't. It may be just a coincidence, but it's a startling one.

I would love to somehow be able to identify Babette and Anny, and learn more about them. I did a quick search to see if I could find anything on them in Nurnberg, and found Christopf in a Nurnberg city directory for 1935:

The address matches Babette's letter exactly - hinter Ledergasse No. 28, second floor! Christopf's occupation was flaschner, which Google Translate tells me means plumber. If they appear in this record, I'm hopeful they'll appear in more. I would love to find out how exactly they connect to Christ Hoffman - Babette called him uncle, so maybe her mom was Christ's sister? Gonna have to find out! Babette and Anny's story deserves to be rediscovered and shared. They lost so much, and endured so much together. It puts my own trials and difficulties in a whole different perspective - I've never lost  a home, been forced to move as a refugee, suffered the death of a spouse, and waited anxiously to know whether a loved one was surviving in a foreign enemy's POW camp. And yet, she reached out to Christ and his family, asking about their welfare, and that of an apparent common friend. She didn't ask for anything - no money, no assistance. I think she just wanted to know someone out there still remembered and cared. I may be 70+ years too late to help Babette and Anny, but I can still remember and care.
Posted by ironhide781 at 11:39 PM