I was looking through my Rootsmagic file the other day, looking for a branch to go climb. I wound up in the Shutes, the family of my grandma Blossom's paternal grandmother. I wound up looking at the second family of my 5th-great-grandfather, Lewis Parks Shute. His first wife, Eliza Wright, died in the mid 1850s, and he remarried to a much younger woman (almost 20 years younger than he was!) named Lucinda Foote. They had three kids together, though according to a published family history, the first two passed away at ages 10 and 8. Lewis had already buried a wife and possibly several of his children, so losing two more must have been just heartbreaking. Saddest of all, Lewis himself died when his youngest son, Abraham Lincoln Shute, was only 4 or 5 years old.

I wanted to know more about Abraham, as I've always been intrigued by his name, so I started looking him up on Ancestry. One of the first documents that came up was a passport application. I've heard Lisa Louise Cooke talk about passport applications, and all the cool stuff you can get from them, so I was excited.

One of the cool things was seeing where he wanted to go. He requested a passport to visit India, Italy, Japan, China, Palestine (Israel), and Egypt. I thought I was the first missionary in my family to visit Japan, but it turns out, Abraham beat me by several decades! Pretty cool to think a relative of mine and I have something like that in common. One major difference though is his passport was for an "indefinite time" so he didn't know how long he'd be out. Makes me wonder when he came home. 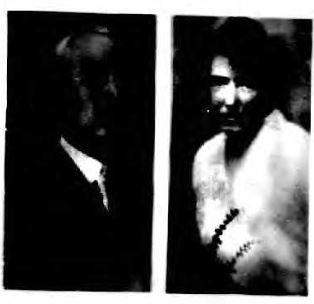 Another cool thing is - pictures! You get a much better picture of his wife, Laura Belle Shute, than you do of him, though you can see him a little. The physical description of him says he was 5'10.5", high and slightly receding forehead, hazel eyes (like me!), medium straight nose, small mouth, receding chin (I never knew your chin could recede?), gray hair, medium complexion, oblong face, and his distinguishing mark was smallpox scars.

One intreresting thing really stood out. His name is written (well, typed) as A. Lincoln Shute. In the notes section, it says "First name is Abraham - but never written." He didn't like, or at least didn't use, his first name. It's rare that you get a glimpse of what your ancestors were like as actual people, and to see something like that, his own personal preference of his name, just really makes him more of a real person to me. 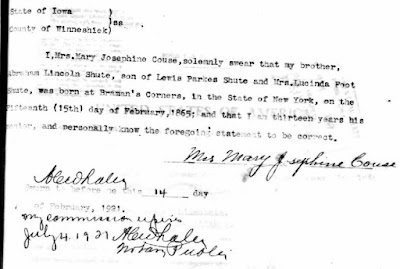 Another interesting thing is his half-sister, Mary Josephine Shute, wrote what looks to be an affidavit confirming his birthdate and place, and had it notarized even. Mary was about 13 years older than Abraham, so she was in a good position to know the facts personally and remember them. What struck me was the name she signed under - Mary Josephine Couse. My records showed she married a guy named Horace Tracy, not someone named Couse. So I went looking for more information on Mary and her family.

What I knew about Mary was that she was born in New York about 1852, and lived there until at least 1865 (when Abraham was born). By 1870, she was working as a teacher and living in Minnesota with Gilbert Sanford and his family, the brother-in-law of Mary's oldest brother (and my direct ancestor) Alexander Blood Shute. I found info on her marriage to Louis/Lewis Couse pretty quickly, as they were married for many years. She and Louis had already gotten married by 1880, so I started to wonder if I had the wrong spouse. When I found her death certificate, the informant was a Mr. R. H. Tracy, So there was a Tracy connection, and I wanted to find it.

I found some records for two Tracys, Roy and Alice, who said they were children of Horace Tracy and Mary Shute. But I couldn't find anything on Horace. What's more, the census records for Mary (now Mary Couse) had an Alice in the family, but no Roy. What was going on here? Then I found two records that helped put things together. One was a probate record for Horace Tracy who died in 1875 (in between the federal censuses) whose estate was administered by Alva Tracy (no relationship stated). The second was 1880 census for Alva Tracy, his wife Phebe, and his grandson - Roy H. Tracy. To double check, I went back to the 1870 census, and found Horace listed as one of the children. That's why I couldn't find him with Mary - they married after 1870, and he had died before 1875. That's a short marriage, not much time to leave records.

I still don't have a marriage record for Horace and Mary, though they apparently married in Minnesota and moved to Iowa, where Horace's family was living. They were married long enough to have two kids together, but Horace was gone by 1875. She married Lewis Couse just a month before the 1880 census was taken, and for some reason, her son Roy was sent to live with his paternal grandparents. Roy stayed a part of his family's life - he was a witness for his sister Alice's wedding, he named one of his daughters after his sister, and in her later years, his mother moved in with him until she passed away. So why would Roy not live with his mother? Louis had work as a carpenter and wagon maker, but maybe that didn't pay enough? He had two kids of his own, Eva and Willis, from a previous marriage when he married Mary, and maybe that played into it as well.

Whatever the cause for having Roy be raised by his grandparents, I'm glad it didn't cut him off from his family. He stayed close to his mom and his sister, and that's awesome. I'm glad Mary stayed involved in her kids' lives, that she didn't let the death of their father cause her to distance herself from them. I've seen firsthand how tragedy can bring a family together, and Mary seems to have drawn her family close to her, even though circumstances caused that she not raise one of her kids in her own home.
Posted by ironhide781 at 12:45 AM