Death records can be very interesting things. Sometimes they can tell a whole story all by themselves. The death certificate I found recently for a second cousin twice removed is like that - the story it tells is brief and tragic, but all the major details are there. The events happened at Mussigbrod Lake exactly 40 years ago this Thursday. 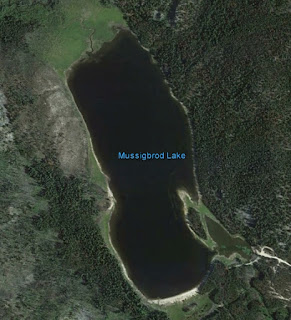 On June 9, 1976, Michael Frankovich, Jr., son of Michael Frankovich, Sr. and Mary (Levick) Frankovich, was a police officer on vacation at Mussigbrod Lake. Mussigbrod Lake lies about 10 miles northwest of the town of Wisdom in Beaverhead County, Montana, and about 60 miles away from Michael's home in Anaconda. At 6pm, on June 9, he was in a boat in the middle of the lake when the boat capsized. Michael didn't make it to shore, as he drowned within minutes of entering the water. His wife Nita was the informant on the sad event, which led me to believe she either witnessed it, or was at the lake with her husband when it happened. Either way, it must have been a horrible experience for her.

Wondering if there might be more to this story, I went and searched for more information. I quickly found this article from a Spokane, WA newspaper two days after the drowning. 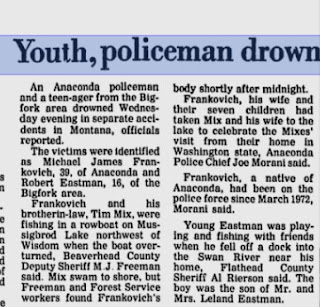 Apparently Michael, Nita, and their seven children had gone to the lake with Michael's brother-in-law Tim Mix to celebrate the Mixes coming to visit. Tim and Michael had been fishing when the boat capsized. Tim made it to shore, but Michael didn't. They recovered his body around midnight that night. The fact that Michael's wife and kids were all there, and that they were celebrating a joyful reunion with family, makes his drowning all the more tragic.

It's amazing how the events of just a few minutes can forever alter the course of people's lives. Nita, her seven kids, and her in-laws probably never forgot that day in June when she became a widow, her kids became fatherless, and her in-laws lost a brother. Ferris Bueller may have been a little flippant when he said "life moves pretty fast," but he was right. I do need to slow down and enjoy things around me a little more, because as Michael's death certificate shows, changes that last forever can happen more quickly than you want to believe.
Posted by ironhide781 at 6:00 AM

So who are you related to and through whom?

Does that mean you're turning your iPhone off on Sundays? haha

Michael was the grandson of Tina Leistikow, Sam Joseph's older sister. As for my phone, well let's not get too carried away. 😃 I will try to keep it in my pocket more.

Such a sad story for the family