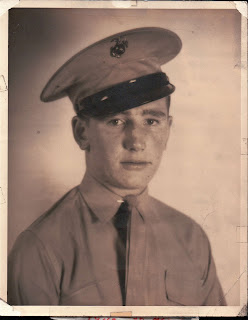 I've known most of my life that my grandpa, Fred J. Gibson, served in the Marines during World War II. I'm very proud of his service, and given the fact that he was technically 17 when he joined up, it blows my mind that someone so young could do something so courageous and selfless.

However, what I didn't know until today is that his father, Fred John Gibson (sometimes known as John Frederick Gibson), also registered for the draft for that same war! 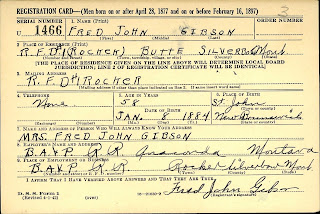 In 1942, the US government instituted its fourth draft of the war, known as the "Old Man's Draft" of men born on or between 28 April 1877 and 16 February 1897. Thus my great-grandfather, though he was 58 years old at the time, was eligible to be drafted should the need arise. Thankfully, he was not needed and was able to remain home.

The best part of the document is in the lower right corner - his signature!

I love the way he writes his F, and my G and J are similar to his. Overall though, his handwriting is much neater than mine.

We often refer to the WWII generation as the "Greatest Generation". I wonder if we pay as much tribute to those who raised that generation, that instilled in them the work ethic, patriotism, and self-sacrifice that led them to become the heroes that they did. In his own way, Fred John Gibson was a part of that "Greatest Generation" for setting the example that his son followed through on, and passed on to his own children and grandchildren.