I've known for several years that my 3rd-great-grandparents, Paul Groff and Susana (Garlinghouse) Groff were buried not too far from where I live, in Thurston County, Washington. For a long time, I was content to have pictures of their graves that I found on Findagrave.com. But earlier this week, I had an idea - I could take my family down to visit their graves, and on the way down, tell them Paul and Susana's story, to make finding their graves more meaningful. This weekend seemed the perfect time to do it - I wasn't busy, my wife had no plans, and the weather was supposed to be nice and sunny (a rare thing for western Washington in February). I told my wife of my plans, and she was fully supportive. It was gonna be great!

And then, life happened.

My wife got sick Friday night, and by Saturday morning, she was feeling no better. But she was still supportive of me taking the older kids on the adventure, as she called it. I felt bad she had to miss out, but I thought the three of us could still have a good experience, so after a quick stop at McDonald's for lunch, we were off.

I didn't tell the kids where we were going, and they were happy just to be going somewhere. I put on their music CD (a kids' music group called the Not-Its) until we were about 20 minutes away, when I told them I was going to tell them a story. I think it helped that I told them ahead of time that I'd play their music for part of the trip, and tell them a story for the rest of the trip down, so they knew it was coming.

I told them the story I was going to tell them was all true. It was about a man named Paul who was born in New York. He had a mom named Hannah, a little brother named Isaac, and a sister whose name I didn't know. He grew up and worked as a mason, making bricks and building bridges and buildings with them. He joined the Army and went all over the place - Mexico, Missouri, lots of far away places. While he was gone, his mom got sick and his little brother broke his leg. His mom wanted him to come home, but he couldn't because he was in the Army. So she wrote to the President of the United States asking him to let her son come home. But the President said no. So Paul stayed with the Army until he was allowed to go home.

When he went home, he took care of his mom and brother, and eventually he married a girl named Charlotte. They had a little girl named Sophronia, and everything seemed to be going well. But then Charlotte got sick and then died. He needed someone to take care of Sophronia while he went out and worked on his farm, so he married again. His second wife was a girl named Susana, and they had eight more kids (they actually had 10, I couldn't remember the actual number). Their kids all grew up and got married and moved away. Paul wanted to live near one of his kids, so he and Susana packed up and moved out to Washington to live near his first daughter Sophronia. Soon after they got to Washington, Paul's wife Susana got sick and died. So Paul lived with Sophronia and her family until he died in 1912.

Once I finished relating Paul's story (and they listened much better than I thought they would) I told them that Paul had a daughter named Mary, who had a daughter named Dora, who had a son named Charles, who had a daughter named Blossom. Then asked them if they knew anyone named Blossom. Leah said "Yeah, Grandma Blossom!" I said "that's right! This story was about Grandma Blossom's great-grandpa, Paul Groff!" The kids couldn't believe the story was about someone in their family. One of them asked me how I knew so much about Paul. I said "remember all those nights I spent doing genealogy? I was finding things that told me the stories of our family." They both said "ooooooh." It was a really cool moment.

Right as I finished the story, we got to the cemetery (talk about perfect timing!). As mentioned before, I had a picture of the graves thanks to Findagrave.com, so I had some idea of what to look for. The cemetery was a lot bigger than I thought it was going to be, so we ended up hiking around most of it in big circles for close to a half hour. I showed the kids the picture, and they were really helpful in finding stones that looked like it. After a while, with the cold wind blowing in our faces for so long, the kids were getting pretty worn out of tromping around looking for a grave we couldn't find, when suddenly I spotted it. Well, them. There were two of them, one for Paul, one for Susana, right next to each other. One thing we noticed right away, and which had made the graves harder to find was the lack of the tree/bush right behind the graves, as is shown in the Findagrave picture. All that's left now is a little stump, which you can see poking out from behind Paul's stone on the left below. 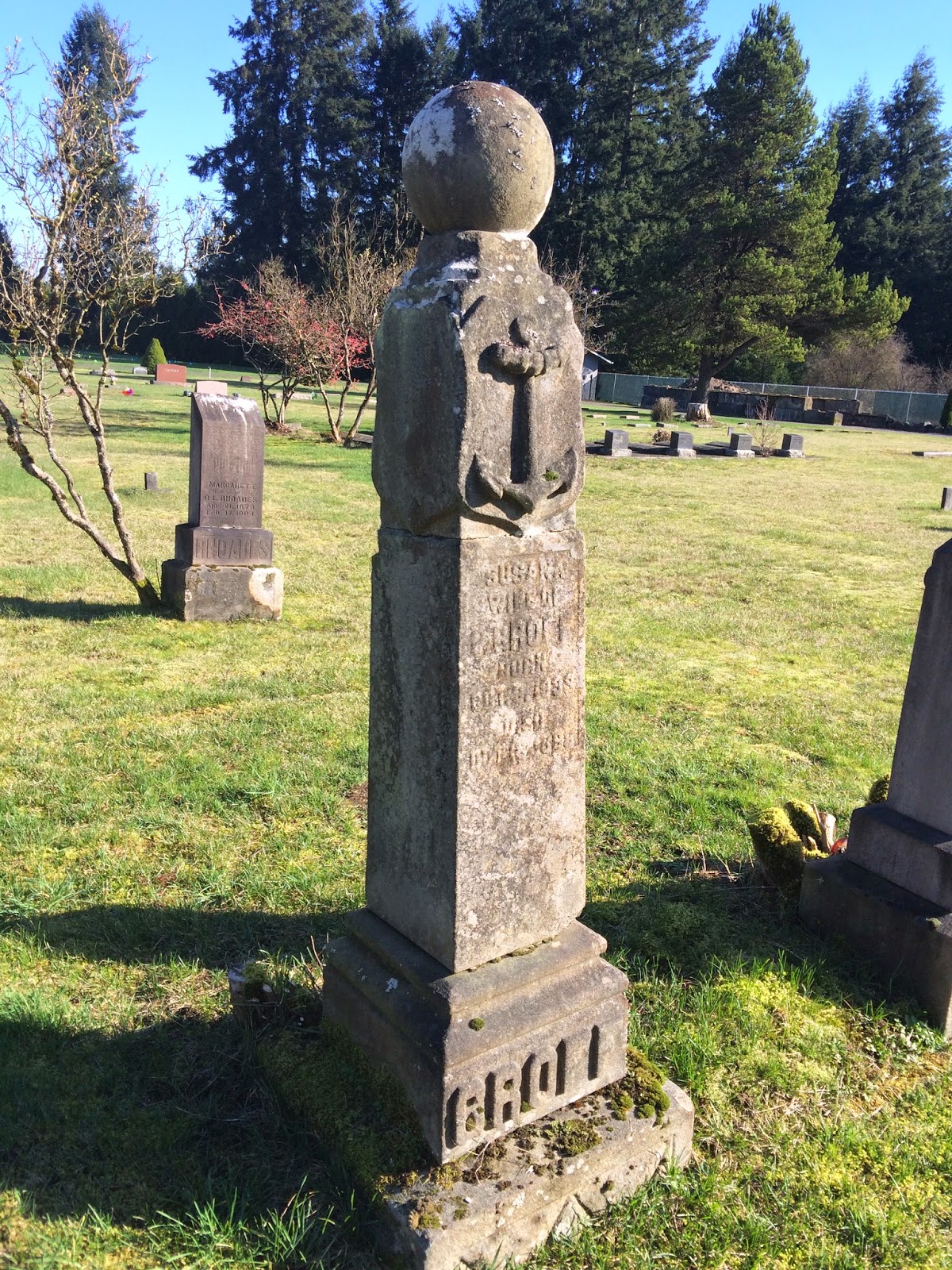 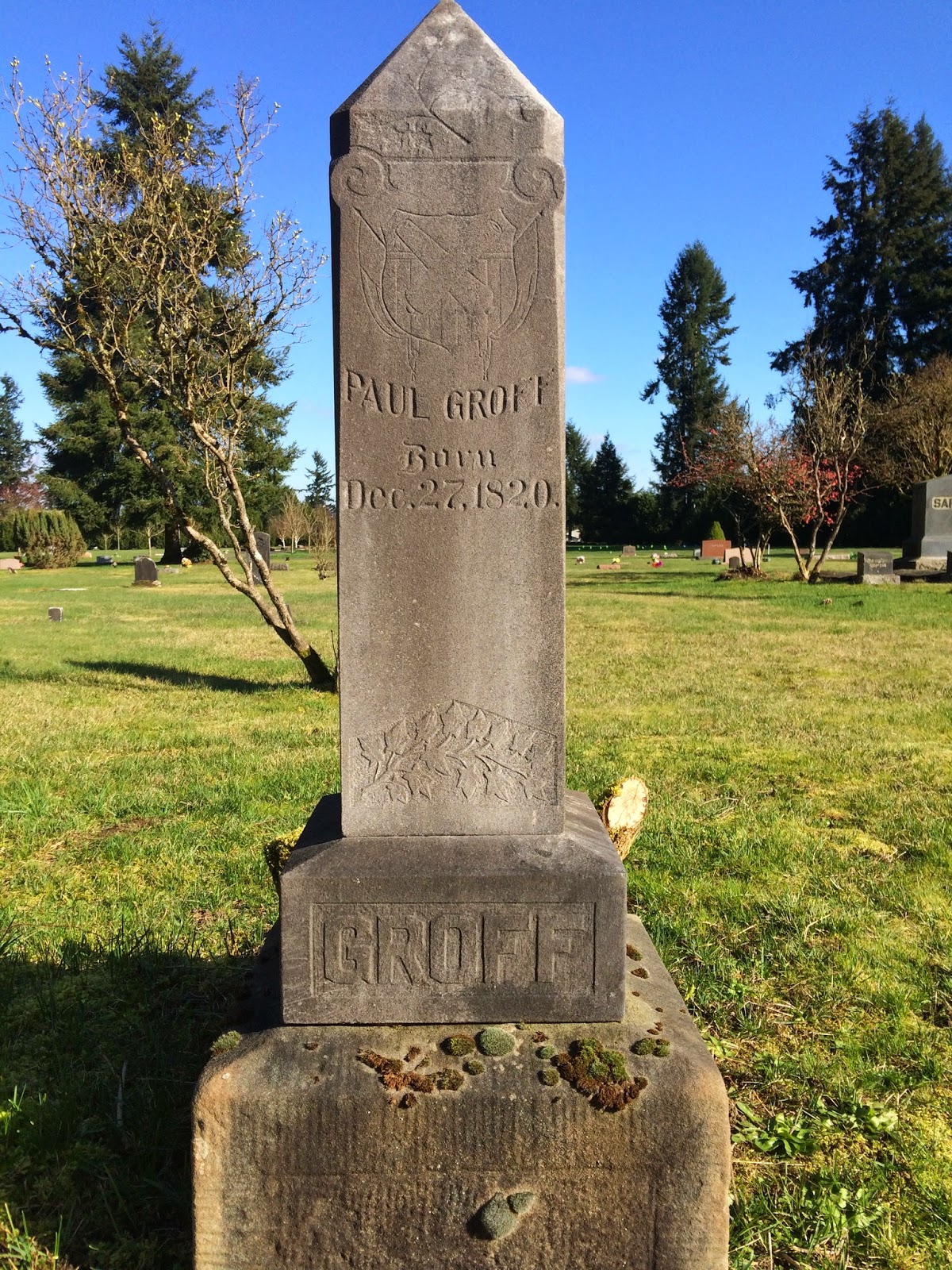 Paul's stone is still in really good condition. The writing was nice and legible, and the designs on the top and bottom were pretty easily seen. Susana's stone has not weathered as well. The picture on her Findagrave memorial shows a bit more of the wording than I could see on the grave now. I could still read "Susana, wife of Groff" (the P. was no longer visible) and "born" and "died" but the dates weren't really legible. The top of the stone looked like it broke off at the anchor and was glued back on. Glad it's still standing though. 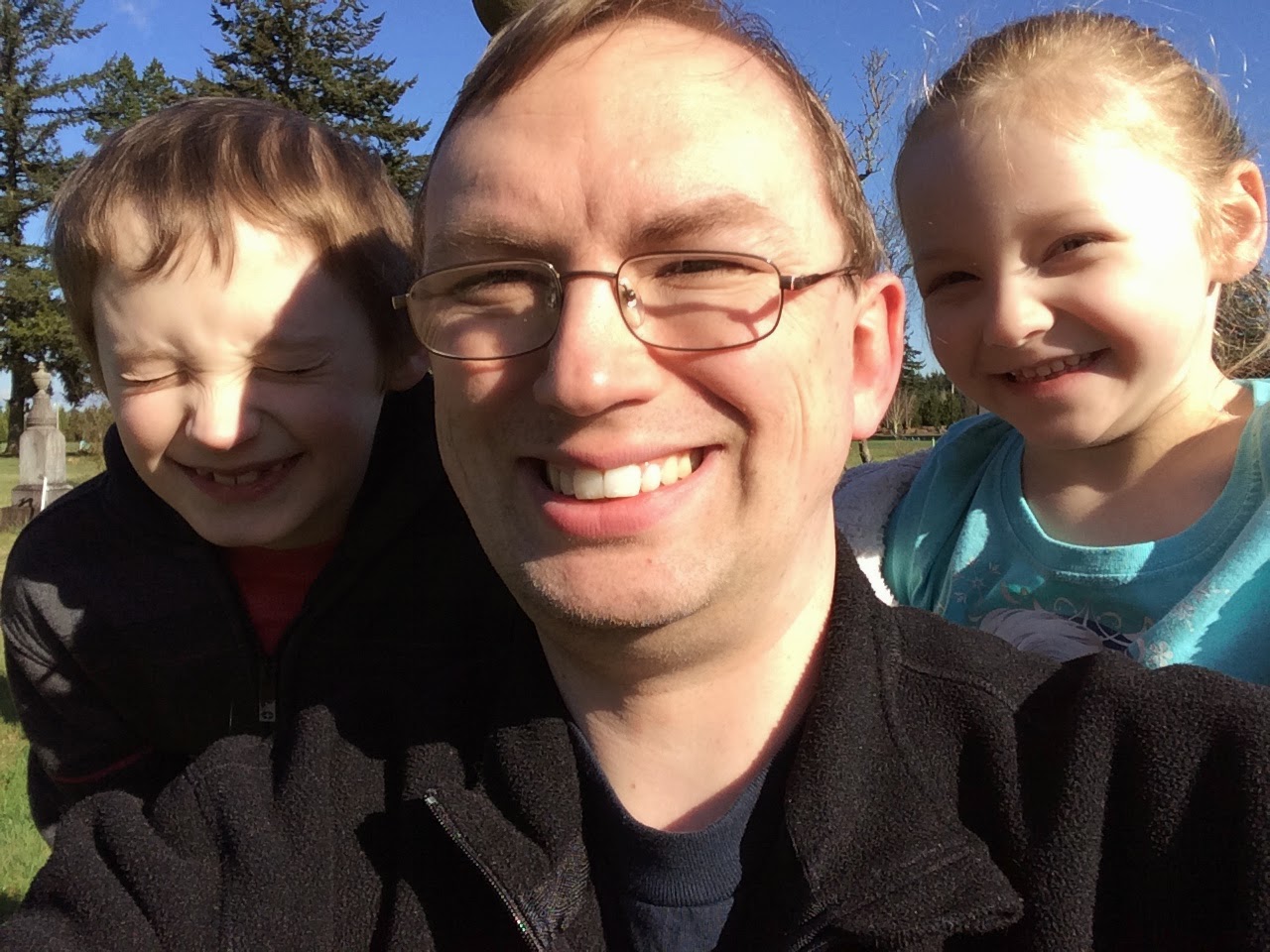 On our way out, Leah found a stone with the name Asher on it. We stopped, and found a whole family plot, with a man named Asher, and an apparent grandson right next to him named Asher as well. The kids got a kick out of seeing someone with the same name as my son. We looked around the plot, and found there were four or five generations of this family all right next to each other. We talked about how cool it will be on resurrection day to have this whole family all together there.  I've noticed that family plots are a pretty rare thing in my family, so it was really neat to see a family all together like that.

We had a fun time, and the trip back home was over before we knew it. The only thing that could have made it better would have been my wife and baby being there with us. We'll have to take another family history trip. Where should we go next time?
Posted by ironhide781 at 11:00 PM