I will preface this post by warning you - the family connections I am about to reveal are so convoluted, it may be difficult to wrap your brain around them with just a written explanation. If you get lost in the words, please refer to this detailed diagram I drew just before midnight the night I was working on this: 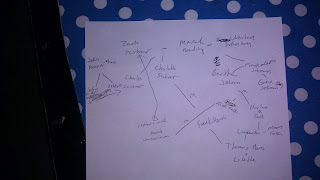 The other night I had a little free time, so I started working on entering my Harris files. I was working on entering the marriage of Harlan Monroe Fulkerson (a cousin of my great-grandfather, James Harris) and Bertha Johnson, when something on the record seemed to jump out at me and smack me upside the head - the names of the witnesses for the marriage. The witnesses were Charles Scribner and Nettie Pascoe, both of whom were already in my database, but for a different reason - Charles' sister Charlotte Scribner was my great-grandfather James Harris' mother, and Nettie Pascoe was his wife (or future wife, as Harlan and Bertha's marriage preceded theirs by a couple months). At first I was completely puzzled - why would Charles be a witness for the marriage of his sister's nephew by marriage? Maybe they knew each other just by virtue of living in the same town, but that struck me as unlikely for some reason. I thought there had to be a closer connection than that.
So I took another look at the bride and groom's data. Harlan's info was pretty straightforward - son of Monroe Fulkerson and Lucinda Harris, born in Montana, residing in Montana. Nothing that said "I know the Scribners" there. Ok, on to Bertha Johnson. Daughter of Frank Johnson and Carrie Tuttle Johnson, born in - Minnesota? That was interesting - Charles and Charlotte Scribner were originally from Minnesota, and had some half-siblings surnamed Johnson. Their mother, Mariah Janette Beardsley, had married Norton Johnson and had four kids by him before he died. (She then married widower Zachariah Scribner, and they had four additional children, including Charles and Charlotte.) Could Frank Johnson be related to Mariah and her first batch of children? I went to my files, and found that Mariah and Norton had indeed had a son named Frank, who had married a Carrie, and had six children - including a Bertha that was the perfect age for Harlan's wife! So Frank and Charlotte were related by blood to Harlan and Bertha respectively. Frank was Harlan's uncle, and Charlotte was Bertha's aunt, which made Charles her uncle. Now that I understood that, his presence as a witness for Bertha's marriage made much more sense. But, (as Dr. Seuss said) that was not all, oh no, that was not all.

Frank Johnson had another daughter, named Grace Johnson. This daughter married a guy named John Pascoe, Jr. This John turned out to be the brother of Nettie Pascoe, who married Charles Scribner. In other words, two siblings (Nettie Pascoe and John Pascoe, Jr.) married an uncle and niece (Charles Scribner and Grace Johnson). That means that the children from these marriages are both first cousins (because they share the same grandparents, John Pascoe Sr. and Annie Tonkin), and first cousins once removed (because they share Mariah Beardsley, grandmother of Charles and Nettie's kids, and great-grandmother of Grace and John's kids). How's that for confusing?

And just one more interesting little tidbit that I came across while trying to figure all of this out. Zachariah Scribner and his family, along with his stepson Frank Johnson and his family, were living in Elysian, Minnesota when the 1880 census was taken. They are listed right next to each other. But listed next to Frank was the family of Levi Van Blaricomb. Levi had a son named David, who in 1912 married Harlan Fulkerson's sister Alice (Fulkerson) Mowatt. In short - Bertha Johnson, as a five-year-old girl, lived near the future husband of her future sister-in-law.

Now aren't you glad I included that little diagram?

PS Levi Van Blaricomb's wife's maiden name was Sarah Johnson, and their oldest son was named Norton. But that's just a coincidence, right? Right?
Posted by ironhide781 at 6:00 AM

It is so interesting the way you tell the story. All of the research that you do is wonderful. Amazing how these details are intertwined. I don’t know how you keep the details straight … actually, it hurts my brain! Nice research, Sherlock. I can’t wait for the next chapter.

Oh, are the Harris’ included in the DNA samples?

I have a pair of sisters who married an uncle/nephew combination in my direct line.

It is not as complicated a story as your family but I totally get what a mind bender it is. Great work to find the connections!