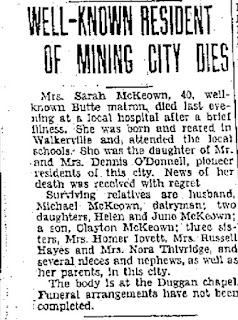 In going through my Joseph files this week (yes, I'm still going through them!), I came across the census records for Olga (Joseph) Haft's second husband, Mike McKeown. He was an Irish immigrant, who first married Sarah O'Donnell, an American-born daughter of Irish immigrants Dennis and Bridget (Cammel) O'Donnell. Mike and Sarah married on 1 Jan 1908 in Butte, Montana, and had three children - Clayton, June, and Helen.When I saw that Sarah died in 1930, I realized that she would have been fairly young, only 44, and wondered if there was an obituary for her. I went to Newspaper Archive and did a quick search. Within a couple minutes, I had it!

There was also a funeral notice a couple days later. According to that notice, Sarah was also involved in something called the Maccabees, Silver Bow Hive no. 569. I'm guessing it was yet another social club (there seems to have been about a billion of those back in the day), and all the members were told to be at St. Patrick's church in Butte to attend Sarah's funeral. What a nice tribute to her.

Sarah's death was another one of those "hinge moments" as I call them, where your family's history turns on a single event. Without Sarah's passing, Mike would never have married Olga, and I would have never heard of him, or Sarah.
Posted by ironhide781 at 6:00 AM