After I'd gone through the obituaries and census records for Grandma Hoffman, I went to FamilySearch's Montana County Marriages database (which, as I've said before, is a goldmine for anyone doing Montana research) and looked for the marriage record for Mary Sitzman and Christ Hoffman. Didn't take long to find it, and I am now SO glad I did! It gives the names of both of their parents - Christ's parents were Gottlieb Hoffman and Kunijnunda Buchner (if you can tell me how the mom's name is pronounced, please do), and Mary's parents were John Sitzman and Teresea Doffler. The witnesses were Rose Sitzman (probably Mary's sister, not her daughter), and Charles Aspling (no idea who he is). But the real find was the birthplace Mary gives - Rosshaupt, Fromberg county, Austria.

I know nothing about that part of the world other than a few names of countries that no longer exist (Czechoslovakia, anyone?) so I hopped online and did some digging for info on Rosshaupt. What I found was very interesting. It turns out, Rosshaupt is now known as Rozvadov, and is just inside the western border of the Czech Republic. The best part is, it's a tiny town, the population is only about a thousand inhabitants even today. That's the best part because it means it's more likely that it's where she's actually from. Kind of like when people from out of state ask where I'm from, I don't tell them Fife, because they've never heard of Fife. They might know about Tacoma, five miles south of here, but to save myself from having to explain where Tacoma is, I just say I'm from "near Seattle," even though Seattle is 30 miles north of here. But Rosshaupt isn't a Seattle town - it's a Fife town! Heck, compared to Rosshaupt, Fife IS Seattle. But that little village name has become very important in finding out more about the Sitzmans, as I'll explain later.

In researching Rosshaupt, I asked for help in finding it from the Germans in Volhynia and Poland mailing list I'm on. One of the members of the list said it was in Bohemia around Grandma Hoffman's time, and Bohemia had been part of the Austria-Hungarian Empire, and thus outside of the scope of the mailing list. Bohemia, if you'll recall, is where Grandma Hoffman said she was from in the 1910 census, so that made perfect sense. It also explained why she said Rosshaupt was part of Austria on her marriage license. On their recommendation, I joined a Germans in Bohemia mailing list and asked them for assistance in finding Rosshaupt and Mary Sitzman and her family. Within a few short hours (yes, hours!) I had several responses. The good people of the Bohemia mailing list told me Rosshaupt was in an area known as Pfraumberg (which sounds like Fromberg), and sent me a whole host of links and tidbits about the area, which I'm still wading my way through. 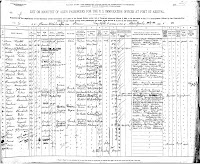 One especially nice lady, a fellow Washingtonian as it turns out, suggested I look at Ellis Island's records as the Sitzmans might have come through there when they immigrated. I'd tried searching the Ellis Island website before, but I'd had no luck on finding Mary Sitzman, and figured she must have come through another port like Baltimore or Philadelphia or something. I asked her why she thought Mary would have come through Ellis Island. She responded, but not with words - she sent me a copy of the passenger list from Ellis Island, showing Maria Zitzmann, her two daughters Marie and Rosa, and three siblings - Franz, Rosina, and Josef, all from Rosshaupt!!! The passenger list says they sailed from Bremen, Germany on the SS Kaiser Wilhelm der Grosse, and landed in New York on June 7, 1906. She also sent a copy of the immigration record (a little plaque-like thing Ellis Island creates showing the immigrant's info extracted from the passenger list) and a picture of the ship they had sailed on. I just sat there, stared at the screen, and couldn't believe my eyes - there was Mary, Rose, Frank, and Joe Sitzman, with my great-grandma Rosie and her sister Mary as little girls, ages 2 and 6. But I'd never found them because I'd always searched for Sitzman, and never thought to try Zitzman or Zitzmann.
The more I stared at this passenger list, the more info I started to see - Josef Zitzmann had a long number written next to his name, which (thanks to Lisa Louise Cooke and Stephen Danko) I figured was his naturalization record number. All the Zitzmanns were listed as going to visit a brother-in-law, Louis Fullmer, who resided at Rear 153 - 43 St. in Pittsburg. (I still don't know who Louis Fullmer is or whose sister he was married to, but I am going to find out!) There was another former resident of Rosshaupt on the boat with them as well, Johann Haffner, who had been to the US before and was going to see his brother Joseph Haffner, who also lived in Pittsburg. I'd like to find more on him too, see if maybe he was a relative or something. The family had $300 between them, which (according to this inflation calculator) would be equivalent to $6800 today. Not bad! But then I noticed that the word 'deported' was stamped over a handwritten SI that had been written next to Maria, Marie, and Rosa's names. My mailing list friend didn't know what that meant, and neither did I. No one in my family knew anything about any ancestors being deported, so that didn't make sense. To really understand this passenger list, I needed help from someone who knew these records better than I did. So I turned to the only person I could think of - Stephen Danko himself.

I certainly didn't expect Mr. Danko to get back to me so quickly (he is a well-known and very busy man, after all), but he did. He responded just a couple hours later, with a lot more info than I was expecting! First, he confirmed that the number next to Josef's name was in fact the information that will lead me (when I get time and opportunity to do it) to his naturalization record. He also said that the SI notation meant Special Inquiry, and meant that Maria and her girls had to meet with an inspector from the Board of Special Inquiry before being admitted to America. There was a page in the ship's manifest (which Mr. Danko was kind enough to look up and send me) that showed the results of all Special Inquiries from this voyage. The notes from inspector Cowley about my Zitzmanns just say "LPC Illegit. ch." Mr. Danko explained that the notation meant the "reason for deportation is LPC, meaning that the authorities thought that since Maria was unmarried and had two illegitimate children, they would likely be unable to support themselves and would become public charges." Whether the girls were really illegitimate, I don't know, but the inspector apparently felt that the risk of them becoming public charges was great enough to send them back to Europe.

And that is how my great-great-grandmother and her two little girls were deported from Ellis Island.

There's more that I've found, but that will have to wait until next time.
Posted by ironhide781 at 1:05 AM

These have been fascinating posts! So many interesting points, not the least of which is your communication with Steve Danko. I wouldn't have thought to go straight to the top! Looking forward to the rest of the story.