I've been making a little progress on my pile of stuff to file this week. (I'd make more if I could stop myself from going after more while I'm supposed to be working on what I have, but you and I both know that's not gonna happen). While I was working through some marriage licenses, I noticed I didn't have a lot of background on one spouse of my great-grandmother's sister Grace Craddock, a guy named Edward Cote. I'd found some newspaper articles on him and Grace, mostly about them visiting Ed's parent's for dinner over the weekend (imagine that, a weekend visit for dinner was considered news for the community!) but I didn't really have much on him beyond that, except for the marriage license for his first marriage, to Glenna Ruth Brown. The license said Ed was born in Alder, Montana, which led me to wonder whether his parents had married in Montana as well. After a few minutes, I found a marriage license for Ed's parents, Charles Cote and Nora Munster (and, interestingly enough, the marriage record Charles' sister Alice as well, as it was on the same page as Charles'). Charles's parents were listed as Odilon Cote and Frances Thiebault, and Charles was said to have been born in Butte, Montana. I thought a name like Odilon Cote would be easy enough to find, so I searched for his marriage record to Frances, and soon found it as well. I was now back to 1889! Odilon gave his birthplace as Canada, so I figured Odilon's parents, Desire Cote and J. Turgeon, were not likely to have married in Montana. I was pretty happy though, having gone back three generations from Ed Cote, I now knew a lot more about his family than I did just a couple hours before.

It was then that I noticed the names at the bottom of Odilon and Frances' marriage license. I didn't recognize the witnesses, Alex Martineau or Annie Theobald (though I still think Annie is probably a relative of Frances' somehow), but the officiating judge's name I did recognize - Caleb E. Irvine. A cousin of mine, Bob Fulkerson, has published portions of my (our) great-great-great-grandfather Thomas W. Harris' journal online, and in that journal, Thomas talks several times about Caleb Irvine. Caleb lived and worked with Thomas at Fort Owen, one of the earliest settlements in Montana, and later worked as a probate judge. But to see his name on a marriage license was just - very surprising. It kind of brought it home that Montana was a very small world, and seeing a connection between my Harris and Craddock families, even a bit remote like this one, was really a neat thing for me.

Then I found another interesting connection. Thinking I was done digging up info on the Cotes, I moved on to a marriage record from 1946 for my great-grandfather James Harris and his second wife, Ruth. Ruth gave her last name as Colesaric, but listed her parents as Holly Young and Frances (Knight) Cote. Another Cote! And with Ruth's last name obviously so different than her father's, and her mother's married name being different as well, that told me there were at least three marriages involved in these names:
Ruth Young married to someone surnamed Colesaric
Holly Young (formerly) married to Frances Knight
Frances (Knight) Young married to someone surnamed Cote

I took a crack at finding more marriage records (I'm telling you, this FamilySearch database on Montana marriages is a GOLDMINE) and soon found more than I bargained for. I discovered that Ruth was married several more times - her first marriage was in 1930 to Joe Barbieri. The marriage didn't last long, because in the 1937 Butte city directory she appears as Ruth McCaslin, wife of Rudolph McCaslin (Ruth McCaslin was actually the name my grandma Sally Crawford gave me for her). Rudolph passed away on 28 Jun 1941, leaving Ruth a widow, but not for long, as she marred Edward Colesaric on 27 Feb, 1943. I'd finally found the Colesaric marriage that was hinted at in Ruth's marriage to my great-grandfather. Her marriage to Edward Colesaric ended in divorce, according to the marriage license for her and James Harris, making James Harris her fourth husband.

Now that I'd solved the Colesaric mystery, I wanted to get some closure and figure out who the Cote was Ruth's mother Frances was married to. I went to find Ruth and her family in the 1930 census, and did so pretty quickly, living with her six siblings, her mother Frances, and - a new husband for the mother named George Duncan. I am still just taken aback with how many marriages this one family is a part of! I went back to FamilySearch, and found Frances Young and George Duncan were married in 1929, just in time for the 1930 census. Frances now had three marriages that I was aware of:
Holly Young, sometime around 1913, probably in Nebraska where most of their children were born
George Duncan, 18 Sep 1929
someone named Cote between 1930 and 1946

I went back to FamilySearch, and tried looking for Frances Duncan marrying a Cote, but with no luck. I then tried Frances Young, and hit paydirt. Frances Young married Orval Cote on 11 Aug 1938, after having divorced from George Duncan. Orval listed his parents as Joseph Cote and Florence Pearson, and said he was born in Butte. I confirmed this by finding him in the 1930 census (with his name spelled Orville), living with his parents Joseph and Florence and four siblings. All the children were born in Montana, so (you guessed it) I went looking for Joseph and Florence's marriage record.

In no time at all, I had it. Joseph and Florence were married on 5 June 1907 in Butte. But best of all - Joseph parents were listed, and I had my connection at last! Joseph's parents were none other than D. Cote and Julia Turgeon - the same Desire Cote and J. Turgeon listed for Odilon Cote, grandfather of Edward Cote. In short - Edward Cote and Orville Cote were first cousins once removed.

If your head is spinning after all this, don't worry. It took me a little while to sort it all out myself. Here's a simple graph of how it all works: 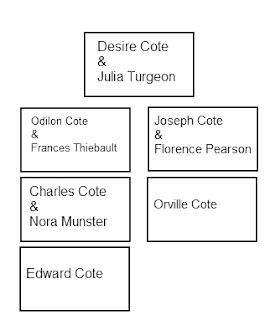 The fun part comes in realizing that Ed Cote's second wife Grace Craddock was a sister of my great-grandmother Edna Craddock. Edna's first husband was James Harris, the 4th husband of Ruth Young, the daughter of Orville's wife Frances (Knight) (Young) Duncan, and that Ed's grandfather (and Orville's uncle) Odilon was the one whose marriage was performed by a close friend of James Harris' grandfather.

I know, I totally felt like that after I figured out the connections. Being your own grandpa would probably be easier tho. :)

I just read your blogon the Cote Haris Connection..Isn't that amazing? Mother would have loved that!! I knew Ruth McCaslin Harris had been married a few times before my dad.She had a daughter named Helen that was her eldest and the Colsaric ( I had forgotten ) was her last name.I have them listed inmy genealogy ont hat family .Next time you come over you might enjoy looking at each of the manuals I have on all these families as I put the pictures I have of them in withwhatever info Ihave on them so far.