Another Christmas has come and gone, and this year was chock full of genealogical goodies! For starters, I put together a simple photo pedigree for each of my dad's parents, using pictures 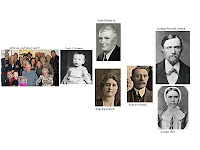 for each ancestor I had a photo of and their name, with no other details. I wanted to do something simple and clean that would show visually some of the results of the last few years' worth of research. For my grandpa Fred, I only had pictures of his parents, his maternal grandfather, and that grandfather's parents. But it was still cool to see them all lined up in a pedigree format. I also included a picture of a family get together (I think it was Papa Fred's birthday?) where all five of his kids, and a bunch of his grandkids and great-grandkids were all together. To me, it all represented my grandpa being in the middle of this genealogical crossroads, as son, grandson, and great-grandson on one side, and father, grandfather, and great-grandfather on the other, kind of like Elder Gerrit Gong talked about during the last General Conference.
For my grandma Bl 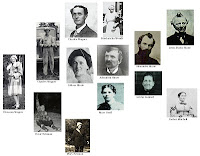 ossom, I've been able to collect a lot more pictures of her ancestry, with photos of her parents, her maternal grandmother, and up to five generations back on her dad's side, back to Lewis Parks Shute and Esther (Mitchell) Sanford (they weren't married, but their kids, Alexander Blood Shute and Letitia Sanford, were). It was really something to be able to show my grandma visually who her ancestors were, and how they are linked to her.
I'm not very skilled yet at putting together projects like this, but I think they both came off very well. I think I need to amend them a bit, adding in birth and death dates, and probably some kind of arrow or line linking each generation to the next. But it would be interesting to try this for my mom's parents, though I'd have to get more pictures from my mom and grandma to do my maternal grandfather's side, as I have hardly any pictures on that side at all. But who knows, there may be an artistic side to me after all! Even if there isn't, I can always lean on my wife and get her to help. :)
Another tangible genealogical gift or 5 I received this Christmas was the Clooz program to help me organize all my genealogy documents, and a set of books from my purchasing plan to complete the my basic shelf of genealogy reference books. I got:
Locating Lost Family Members & Friends
BCG Genealogical Standards Manual
Producing a Quality Family History
Genealogy as Pastime and Profession
So a big THANK YOU! to my parents for supporting their family historian son. :)

Now for the intangible gift. Late Christmas night, my folks pulled out an old cardboard box that had an old movie projector, and some old reels of film. Turns out it was old home movies going back to the late 70s and early 80s. Some of the movies were from before I was born, even one of my parents' rehearsal dinner. There was footage of my great-grandma Edna, great-grandma Rosie, and me and my sister as little kids back when we still lived in Montana. But the real treat was getting to hear my parents and grandparents talk about who was in the movies, naming people they saw in them, and reminiscing about things they'd done with them. I wanted to just sit there and video tape the old movies being played, so I could record the stories they were all sharing about those old videos. Maybe I'll get to do that next time, after the movies have been transferred to DVD (which my parents plan on doing for all the old videos they have). I really look forward to that, as there are some movies that go back into the 60s that I've never seen before, and can't wait to watch.

So, all in all, it was a fantastic Christmas. Got a lot of reading to do, research to do, and movies to watch. Let's get started!