Today for Tombstone Tuesday, I am profiling my great-great-grandfather, Samuel Joseph. He was born on 2 February 1866 at or near Uljanowka, in the Volhynia region of present day Ukraine, to German parents - Ludwig and Justine (Witt) Joseph. He had several siblings, including Justine (also known as Christine or Tena), Gottlieb, and Wilhelmina (known as Minnie). He married Pauline Rosen (or Rossenke, as it's been spelled in other documents) about 1888 in Ukraine. Together they had five children: Olga, Augusta, Helena Patricia, Emil, and Lydia.

Sam's older brother Gottlieb moved from Volhynia to Manitoba, Canada in 1896. Sam and his family stayed in Ukraine for another nine years before following Gottlieb to Manitoba. The family of seven made their way up to England, and set sail from Liverpool, England on the SS Tunisian on 5 October 1905 and arrived in Quebec, Canada a few days later. Soon after arriving, they made their way west to Manitoba, and settled near Winnipeg, close to Sam's brother Gottlieb and his family.
The family didn't stay long in Manitoba. Olga married Gustav Haft in 1906 and moved shortly thereafter to Anaconda, Montana. Three years later, Pauline passed away on 6 January 1909 in Grass River, Manitoba. Three months after Pauline's death, Sam packed up his family and they moved to Anaconda.
Sam lived the rest of his life in Anaconda, but made frequent trips back to Winnipeg to visit his father and mother, who had emigrated there around the same time as Gottlieb. Four of his children married and stayed in Montana. Emil changed his name to Elmer and married Julia Barret, daughter of Michael and Julia (O'Connors) Barret. Augusta (my great-grandmother) first married Charles Staffan in 1910, and he died in 1918, probably as part of the worldwide flu epidemic. She then married John Frederick Gibson (my great-grandfather) in 1925. She died in 1931, following a hysterectomy. Helena (who later went by her middle name, Pat) married Jack Walsh, a wealthy business owner in Butte. Lydia married Jacob Reitnauer and they moved to South Dakota. Apparently, from what my grandpa tells me, they didn't have much contact over the years after the move. 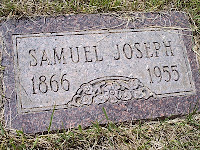 Sam worked for many years on the Butte, Anaconda, and Pacific Railroad, as did his son-in-law, John F. Gibson. He lived with John and his son, Fred (my grandpa) for several years, and then moved in with one of his other children. He passed away 10 April 1955 in Rocker, Montana. He is buried in the Mt. Carmel Cemetery in Anaconda, as are his daughter Augusta and son Elmer.
Posted by ironhide781 at 8:14 AM